I needed a butt-kicker this weekend and boy did this one deliver. I was planning on taking the old trail up Mount Teneriffe (past Kamikaze falls) getting the most bang for my buck with the elevation gain. Unfortunately, when I drove to the trailhead the car park was closed because it was still covered in snow from the snowpocalypse! Quickly changing my plan I thought I parked at the Mount Si trailhead about half a mile down the road. From here I used Gaia to map a route to Teneriffe and it still seemed reasonable just a few more miles.

Daylight savings got me this morning so I was moving pretty slow. It took me a while to talk myself into getting ready and getting on the trail. For training for bigger things to come I loaded my pack up with extra water and was carrying around 27lb. There was pretty much snow the whole way from the bottom, it was crunchy this early in the morning so it wasn’t long before I put on my microspikes.

Thankfully Gaia was showing me the way because I forget how many interconnected trails there are between Mount Si and Mount Teneriffe. I took the Talus loop trail to connect with the Teneriffe trail then I got on the Kamikaze connecter. Thankfully I didn’t have far to go on this trail because there were only 2 or 3 sets of footprints. I was post-holing every few steps, getting stuck in trees and trying to stay on the trail. Finally, I met up with the kamikaze trail which was pretty well packed down.

The falls were looking great covered in snow with icicles coming off the rocks. I took a few photos before joining the trail again. Here the trail goes straight up which was pretty exhausting moving over that much snow. It was still pretty hard but the traffic was less than the Kamikaze trail so I had to do a bit more trail breaking. I broke the ridge from here it was another mile at 2000ft elevation to the summit. I was worried it had taken me too long to get to this point (about 90 mins) and I had to do a lot of mental pushing to not turn around. closer to the top the snow got much softer and I had to swap to snowshoes because I was exhausting myself slipping after every step.

When I finally broke the tree line I moved through the open sections as fast as possible because there were some obvious signs of small slides due to sun warming. The snow in these sections was super icy that I was glad my snowshoe crampons were biting into it. When I got to the summit there was one other guy there who had come up the other ridge from Si which was about 8 miles one way. He headed back and I had the summit for myself.

I debated avoiding the steep descent by going back another way but it seemed like the quickest way down and I was already slower than I thought I would be. I headed down the same way, had some troubles with my snowshoes in places where the snow was really icy and found my butt in the snow a few times! I was glad I still had them on though because further down the trail it was still soft snow. Almost at the end of the ridge where it gets really steep and narrow, I swapped back to microspikes. 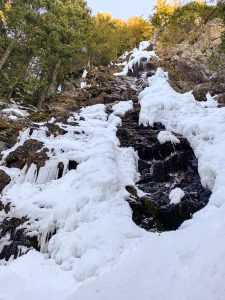 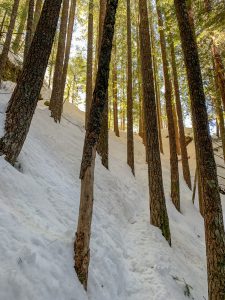 Trail to the ridge above the falls 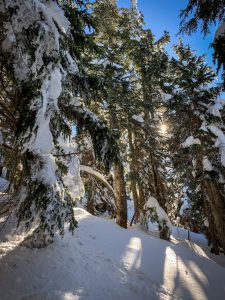 last trees before the summit 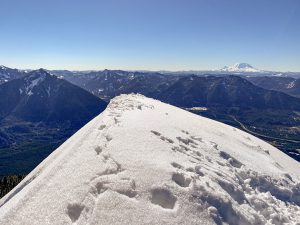 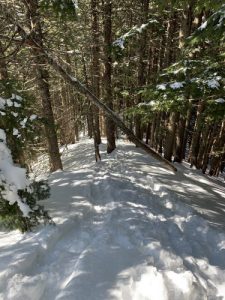 The way back was pretty uneventful from the falls, the connector trail was still crappy and I managed to posthole up to my hips on one leg which was pretty exhausting to get out of. Back on the packed down Talus loop trail and Mount Si trail it was warmed and was getting pretty sloshy.

I made it back to the car on the 6-hour mark and was pretty tired!