This trip is not really for Sourdough Mountain but really for peak 6308 because the summer route goes through a lot of avalanche terrain so to get the same fantastic views you turn off the trail early and head up the ridgeline for a little more elevation.

I went out with a group of mountaineers in search of epic views and conditioning elevation and we got both in spades. Unfortunately, the long drive and the shorter daylight hours meant we had to leave Seattle before the crack of dawn. We planned to start on the trail by 8 but were a little late at 8:45. My calves certainly remembered the trail from when I did it in the summer and in fact I remember thinking wouldn’t be back to do it again for a while! In the first 2 miles of trail, you climb 3000ft which comes in the form of very steep switchbacks. Pretty much from the beginning, there was intermittent snow on the trail, hard sheets of ice at the very bottom getting much softer after the first few switchbacks. We set a slower pace than I did on Teneriffe last weekend which made the climb bearable.

It took us around 2 hours for the first 2 miles, at this spot you get a view of some of the peaks through the trees and we decided to put our snowshoes on because we’d already started slipping a little climbing in the snow. The day was warming up and the snow already felt pretty soft. At around 3 miles the route breaks away from the summer trail and here the navigation got a little tricky. It seemed like there were tracks going in every direction so we followed some we thought were heading the right way. They veered too much to the right and we discovered we’d gone ~400m alone the summer trail instead of heading up the ridge. To get back on the route we cut up from the summer trail to try and intersect with the winter route. It was really hard going and in hindsight, we should have just backtracked. The snow wasn’t consolidated at all and breaking trail was exhausting. The soft snow on the slopes was sliding a lot making some of us a little nervous. It probably took us 30mins to get onto the ridgeline and intersect with the winter route. 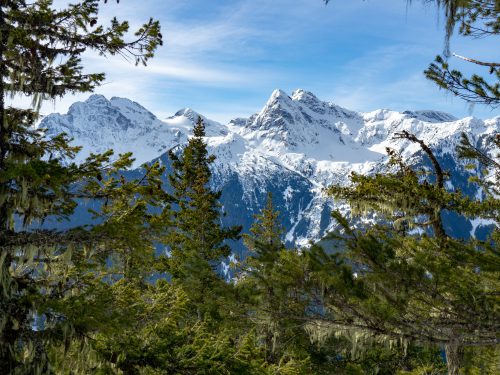 Views starting to peak through 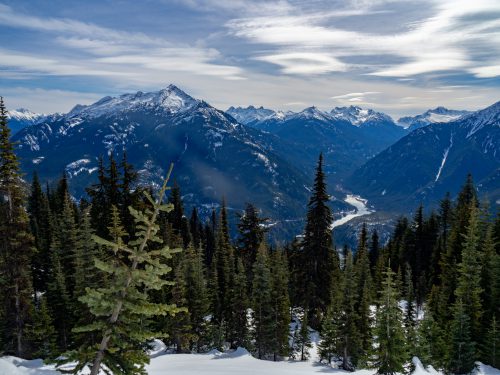 Finally made the ridge 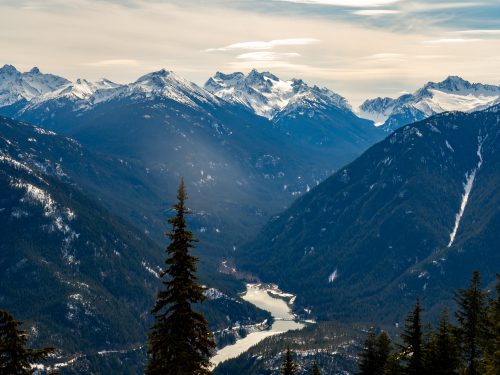 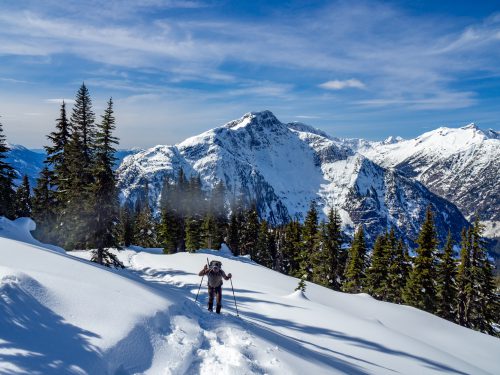 Snowshoeing to the top

As we climbed up the ridge the trees thinned out and the sun started to beat down on us turning into t-shirt weather. We continued climbing, the sun was warming up the snow and we saw lots of signs of wet loose avalanches that the forecast had predicted. Getting on to the top of the ridge required snowshoeing up a knife-edge type ridge. From there it was 360 views of many of the North cascade peaks (colonial and pyramid being front and centre) the views down to Diablo lake were also spectacular where you could see it was partially frozen. 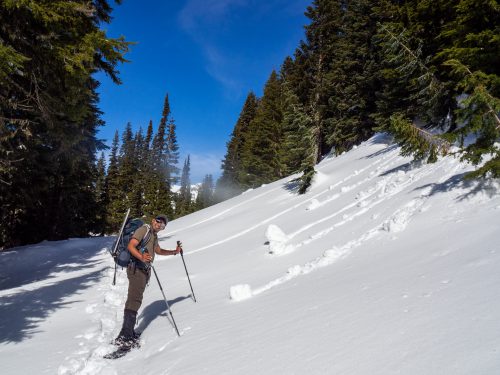 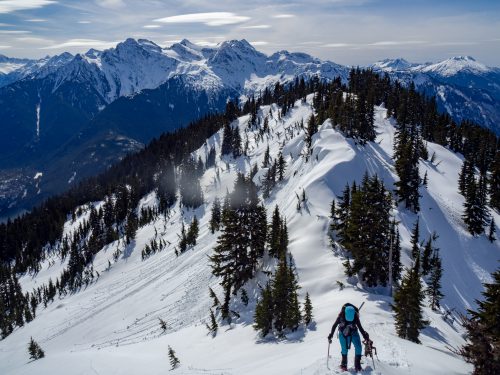 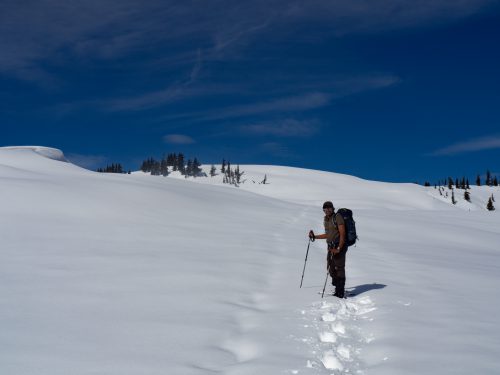 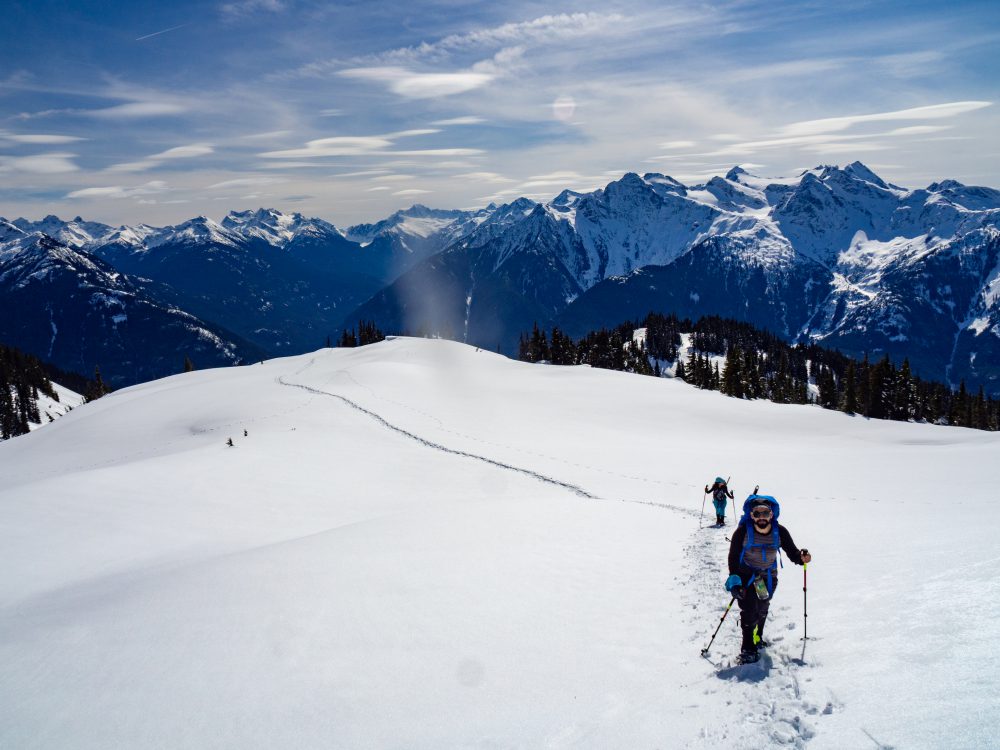 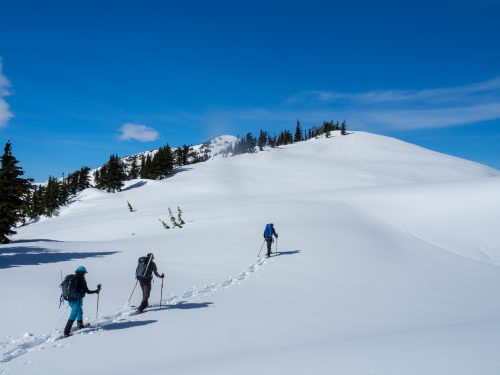 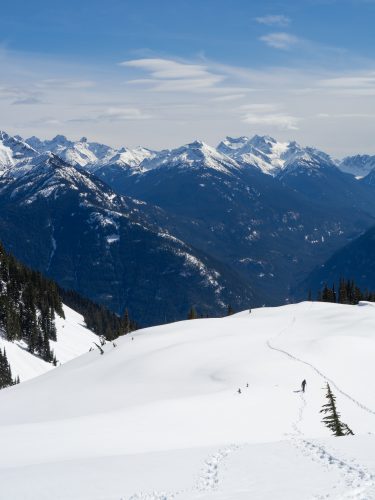 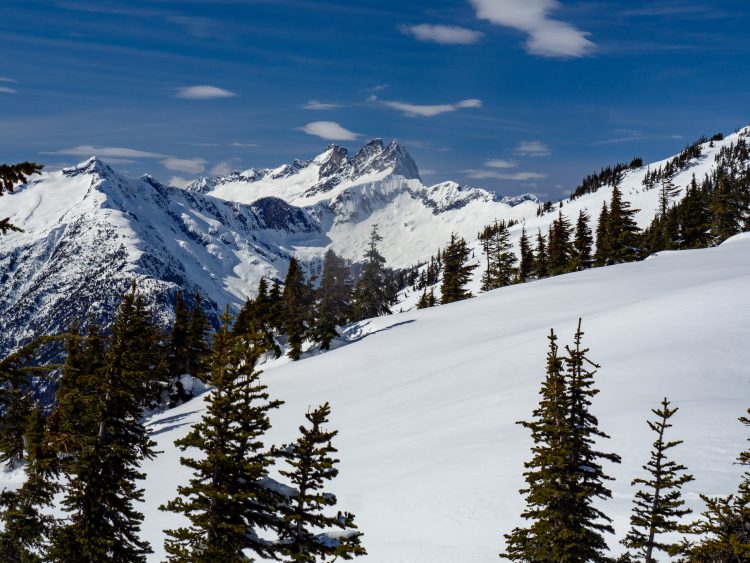 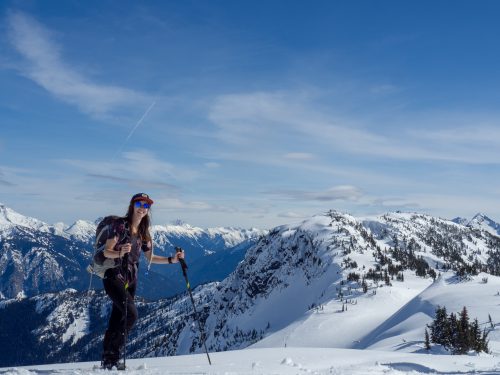 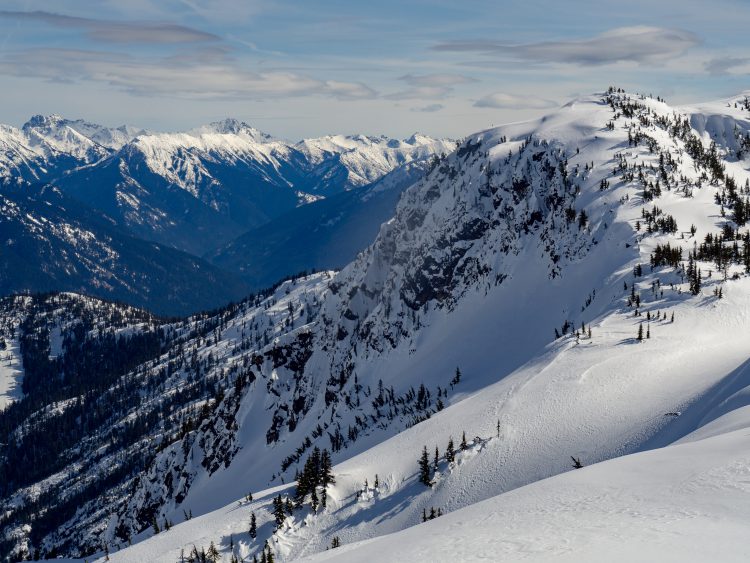 We were starting to run really short on time as we move along the ridge so we decided to stop just before making it to peak 6308. We had a quick lunch break and had to start heading back down to make it back in a reasonable hour. The knife-edge ridge was sketchier on the way down, we were worried about the wet slides so took it one at a time. 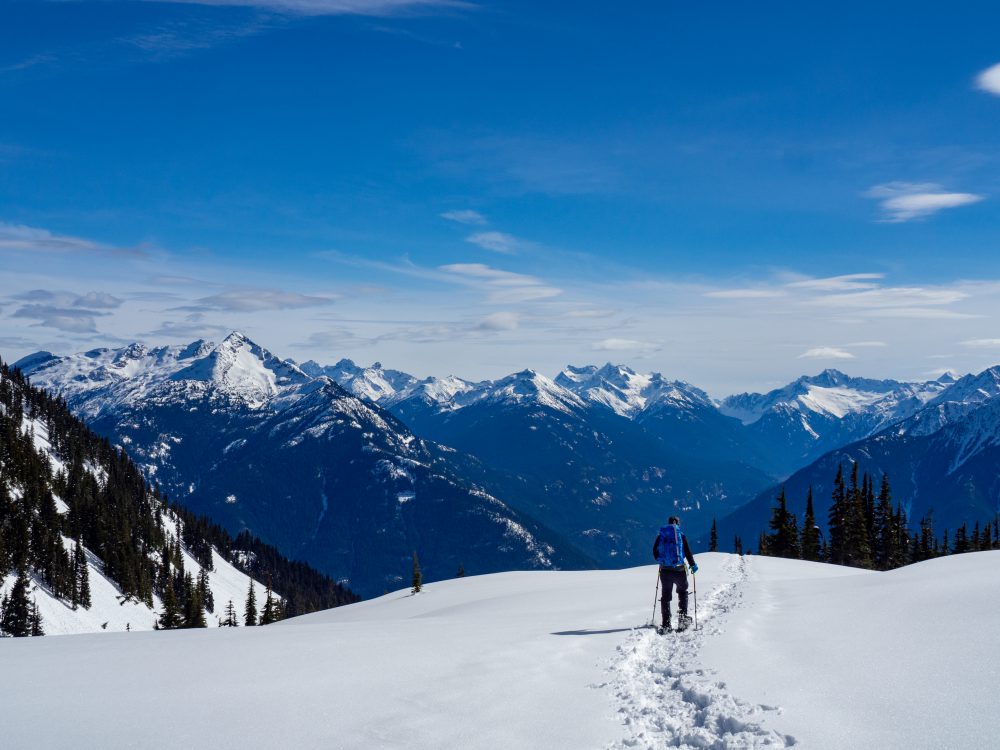 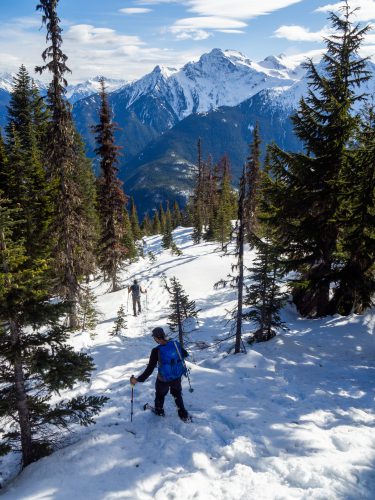 The trip back to the car was pretty uneventful we were all pretty tired, the sun really taking it out of us. The wet snow made snowshoeing the steep slopes difficult as it was hard to get good traction. We didn’t make any wrong turns on the way down, we stopped a couple of time for a break and to take off snowshoes returning to the car at 5:30.