This winter season (even though it was shortened by my trip to Australia) I got into backcountry skiing. My main goal was to prepare for spring and the volcano skiing season. I was comfortable with the idea of a Saint Helens ski seeing as I’d summited it twice last year so I was stoked to be joined by Melanie and Katie in the goal. We grabbed permits and crossed our fingers for the weather.

To make a weekend of it we went Saturday to camp out along the trail before pushing for the summit Sunday. From the trailhead, there was snow most of the way to our chosen campsite at chocolate falls. The snow at the start was a little patchy so we had to take our skis off a couple of times to cross. Apart from that, the gradient was very gentle which made for some easy skinning. It was 1.5 miles to camp which took about 3 hours. We got into camp a bit after 4, giving us time to set up a tent, make water and ready for an early night. Unfortunately, we discovered that Katie had left her food in the car and I left my fork at home. Melanie and I were happy to share our extra food and we all had to share Melanie’s spoon. It was a surprisingly cold night I was grateful to have my warm sleeping bag and down booties! 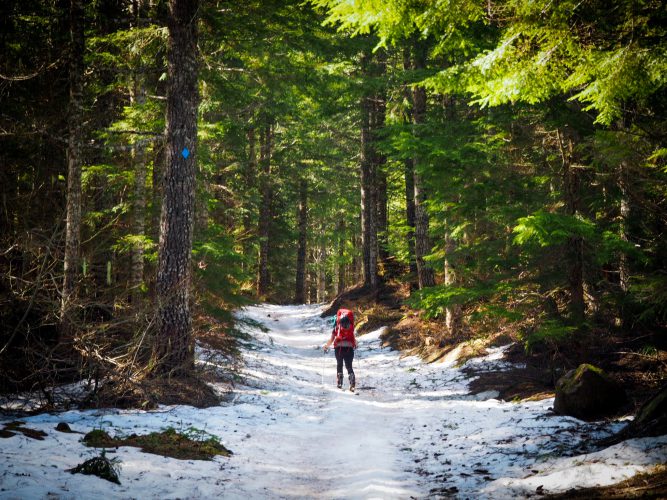 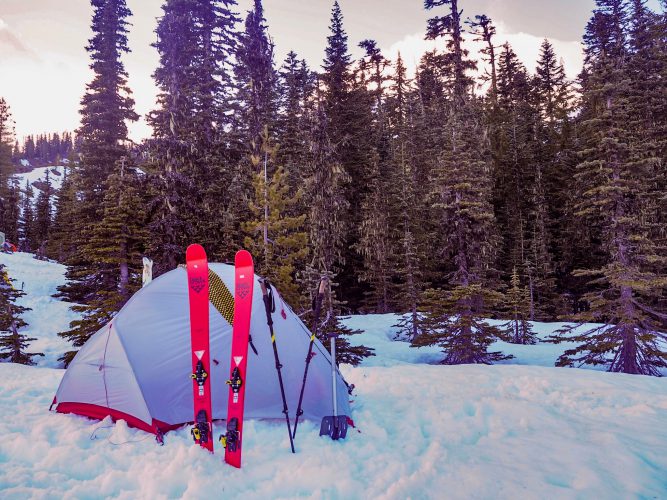 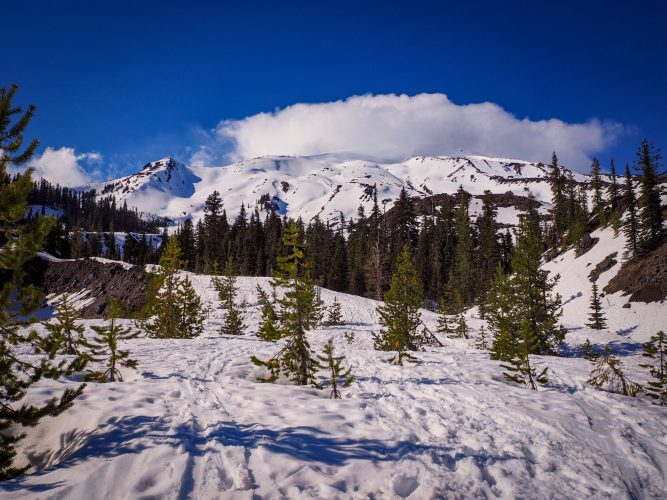 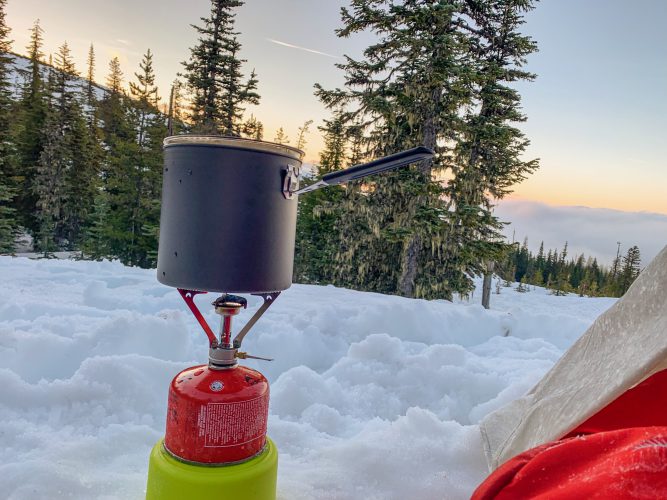 We woke just before 6 with the tent and everything left outside covered in ice. The snow had completely hardened up and it was really chilly I had to put all my layers on as we got ready. There was a lot of people coming up the trail as we left camp at 7:15 so we joined in on the conga line. The worm flows route from this point is pretty unforgiving it gains a ridge right near chocolate falls (3700ft) and the treeline ends at (4800ft). This was not a great day to forget my sunscreen but after my recent trip to Hawaii, I’d taken it out of my bag. I had to borrow some from a climber along the way.

The sun was out in full force so it was really warm climbing. A low cloud stayed in the valley which made it feel like we were on an island surrounded by a sea of clouds. Pretty early on we swapped from skinning to just boot packing up the ridge because the boot tracks and hard ice made it hard work. We had to stop several times on the way up for a break, taking our heavy packs off for a break. Melanie and Katie weren’t feeling the climb and separately called it before the summit. I continued on by myself. I didn’t realize what we’d been aiming for was the false summit so I was pretty dismayed when I saw how much further I had to climb right at the end. 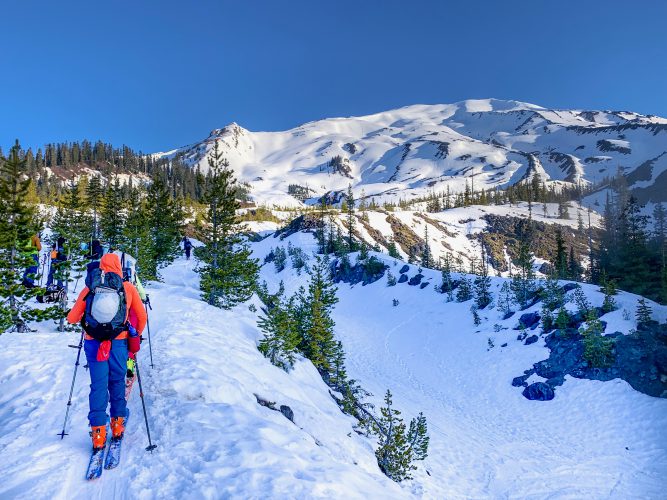 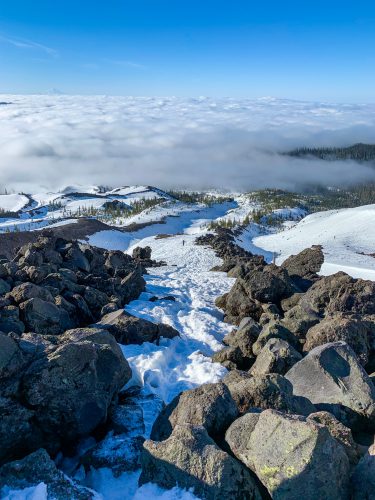 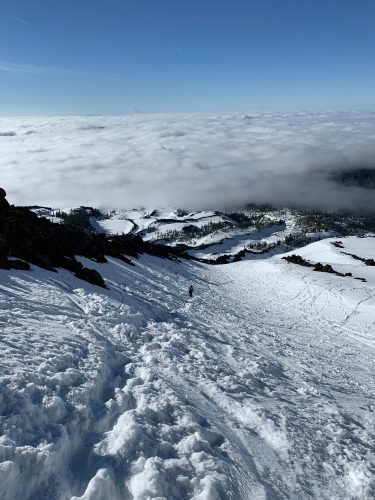 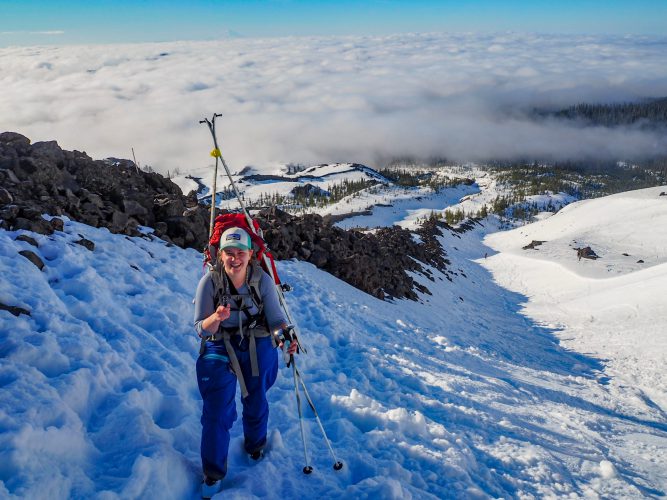 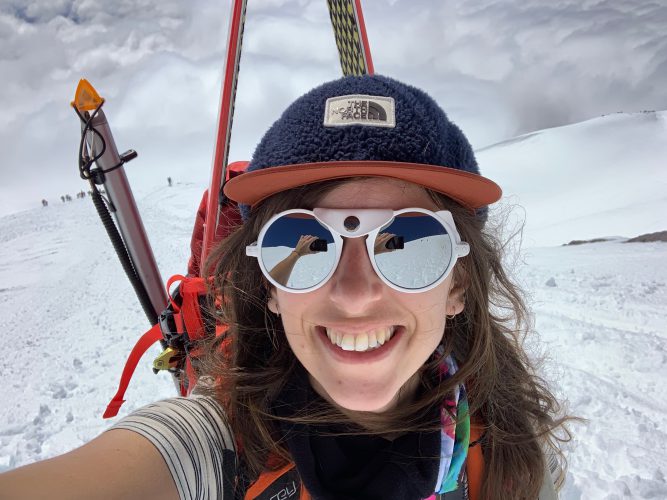 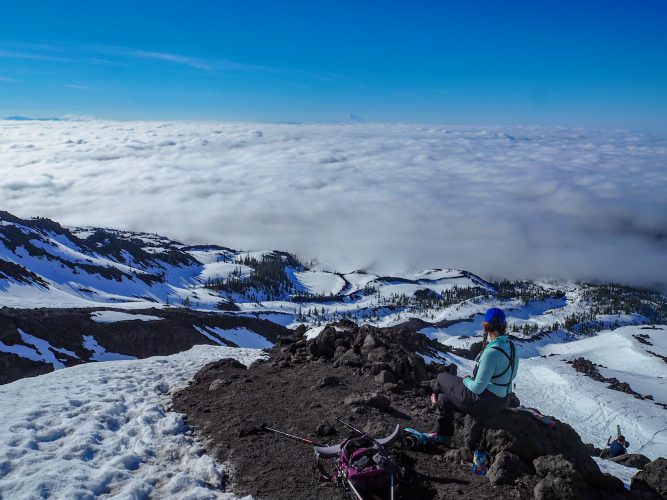 At the crater rim all the other skiers were hanging out on the rim (keeping away from the corniced edge) it felt like a big party. They were all waiting for the snow to soften a little more for the descent. I started the descent at 1 and took a line adjacent to the climbing trail to see if I could meet up with Katie on the way down. It wasn’t steep skiing but I did have to get used to skiing with sore legs (thanks to the climb) and a bit of chatter in my skis because of the snow being a little hard still. About halfway back to camp, I was surrounded by the low cloud which made route finding extremely difficult. Not being able to tell which side of a ridge I should stay on I took off my skis to climb over some rocks to realize it was a narrow corniced ridge so I was much better off where I was. As I climbed back over the clouds lifted to confirm this. I had so trouble much trouble putting my ski back on, the snow was soft and steep and I kept sinking into it. I got ski on then manage to fall down the slop a little out of reach of my other ski. I walked back to get my other ski. Only to drop it and it happened to land in a glissade shoot running all the way to the bottom of the bowl I was in, maybe like 20m. Pretty fed up with all of it I glissaded down using my poles and holding my ski. Reunited with my other ski I put them both on to continue my ski down. Some of the more narrow points of the trail up I was worried about the ski but I managed them all fine. 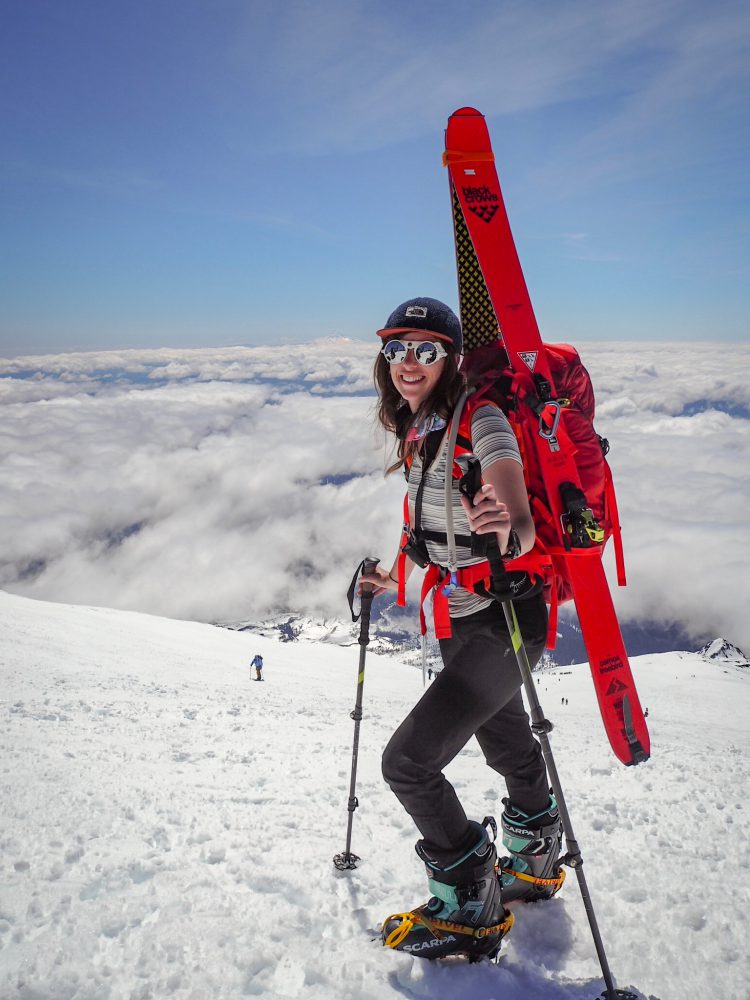 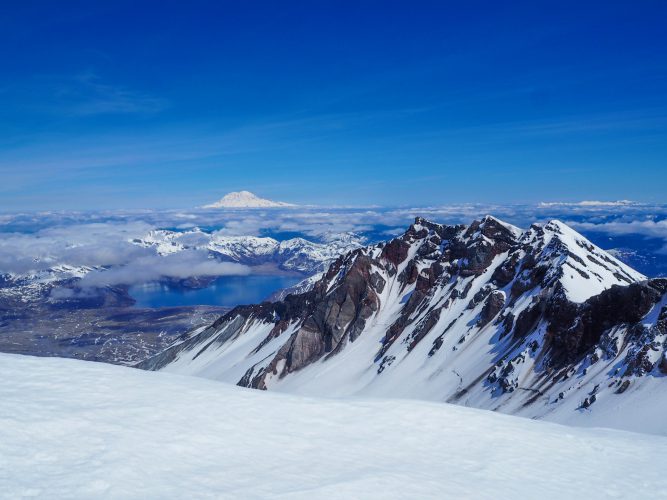 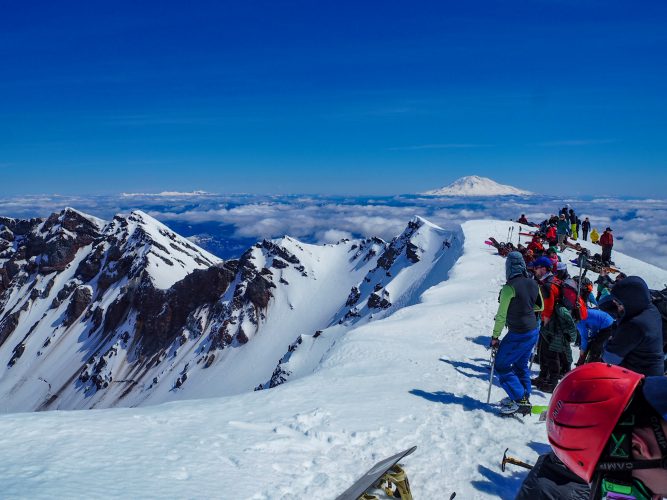 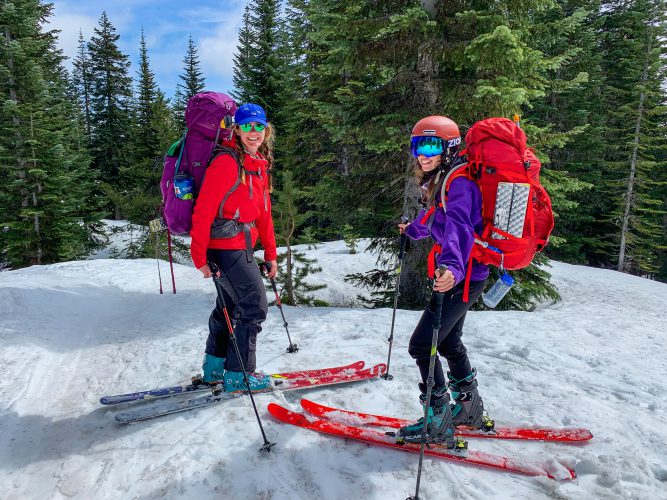 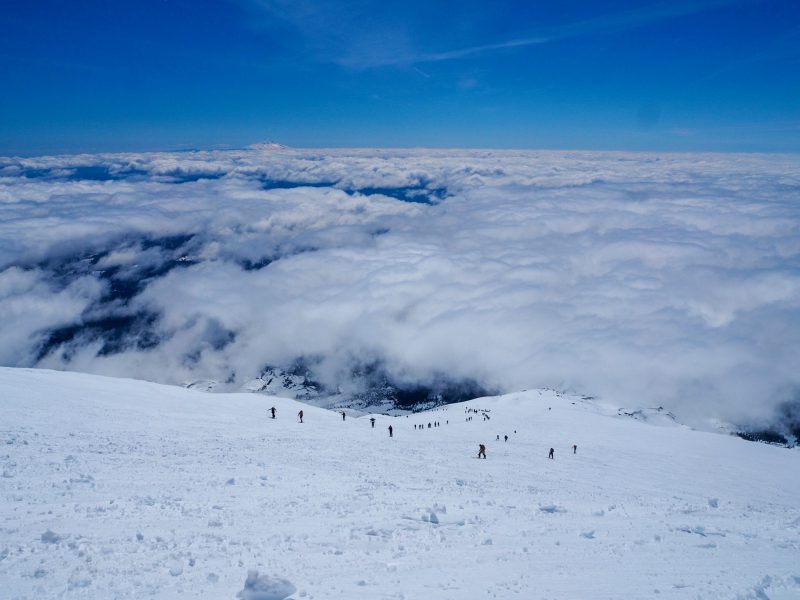 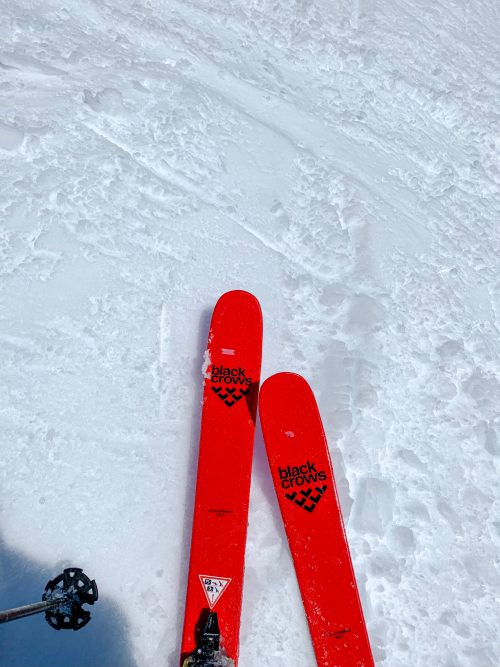 Katie and Melanie were both back at camp and we packed up ready to finish the ski out. Skiing down the trail with our 30 lb backpack was new but the easy gradient made it manageable and we got back to the car in no time.

Overall it was definitely harder than I thought. The added weight of carrying the skis made the climb much more exhausting than I anticipated. The sun didn’t help because my lips, nose and arms were absolutely fried by the end. We were really lucky with the weather, in bad visibility, it would be so much harder. For the split second of no visibility, I was seriously worried I take the wrong line and get stuck somewhere. Despite the added challenges, I can’t wait to ski this mountain again.

Happy birthday to my love! May your smile always b

Mountain paradise this weekend in the Alpine Lakes

On day 13 of the JMT we left Rae Lakes, hiked over

On Day 11 of the JMT we hiked from Upper Palisade